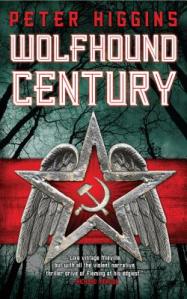 Originally I wanted this to be a review of Wolfhound Century by Peter Higgins, but then I realized that what I really wanted to talk about was names and naming. Naming of things and places is something I pay quite a bit attention to, and it can really annoy or delight me. Keep in mind, I am writing this as a reader of speculative fiction, not a creator of such. I’m also writing this as a Russian speaker, and I might be entirely off the mark with my interpretations.

First of all, I really liked Wolfhound Century. Before you say, ‘well duh, it’s set in a Soviet Union-inspired universe”, let it be known that 9 times out of 10 I am not satisfied when authors take Russia or USSR and make it a setting for their novel (I’m talking mainly about non-Russian authors here).

In Wolfhound Century, USSR is not the setting, not really. It’s more of an inspiration for the setting, which gives Higgins much more freedom in world-building and naming. He does use some real names (Vissarion, Mirgorod, names he uses for places like Apraksin in Apraksin Bazaar). He also makes up some names that have the Slavic feel to them and thus ‘feel’ right. Not all names are particularly Slavic in nature. See, for example, Joseph Kantor, Ziller, and Raku (that sounds Japanese to me more than anything).

Vissarion is a really interesting name. First of all, it sounds quite imposing and is thus a good name for someone who is employed by the police in the vast unnamed totalitarian state. A bit of trivia: Stalin’s father was named Vissarion. More recently, Vissarion is the name of a leader of a religious cult in Siberia. Vissarion the Cult Leader is under the impression that he is the reincarnation of Jesus (like that has never been done before).

Lom, apart from having a nice staccato ring to it, also means ‘crowbar’ in Russian. In jokes and pop culture it is widely considered to be the ultimate weapon (‘Против лома нет приёма’, for which I can’t really find an adequate translation, but literally it means ‘there is no move to block a crowbar’), and that a Russian armed with a crowbar is practically unstoppable.

Lavrentina Chazia — she is the head of the Secret Police, and if you know a bit of Soviet history, it will be quite obvious to you that her name is a female/modified version of Lavrentii Beria, who was the secret police chief under Stalin.

Savinkov — there is a real historic Savinkov, who managed in his lifetime to participate in some assassinations, escape from prison, fight in WWI, serve as Deputy War Minister after the 1917 revolution, and still find time to write four books.

Higgins did a really good job using Russian words for places, professions, food, any of those details that really make or break world-building. I can’t help but feel that I’m getting a bit more mileage out of this book than people who don’t know the language. I know what ‘vlast’, ‘lodka’, and ‘dvornik’ mean without the need for explanation. But apart from just pure semantic meaning, some words have cultural meanings attached to them. Let’s look at ‘dvornik’.

Dvornik is not simply a concierge and yard sweeper. There is an archetypal image of dvornik in Soviet collective unconscious and Soviet lit (I kid you not), so dvornik is really more like a state of mind. This image normally includes one of two possible personalities: a very suspicious dvornik (who is most definitely in the employ of the police), or a not-very-sober belligerent man who is either good friends with or wages unending war on stray mutts. I could potentially write an essay on this, stay tuned.

I could go on for a while about this and cover many more names, including some that puzzled me, like ‘paluba’ (it means ‘ship’s deck’, which did not seem to fit the particular creature it described). So well done, Mr. Higgins, Wolfhound Century was  the read I was hoping for. I was surprised at how well the mix of real names, quasi-Slavic names, and English worked for me.