First of all, Books Brains and Beer is back (-ish)! Or is he? He isn’t sure. But he has been reading up a storm and posted a bunch of flash reviews. I like short reviews. Every time I see some gigantic review spread in The New York Times, I have a feeling that I could save myself some time by skipping the review and reading the book instead.

Which brings me to my own brief bookish observations.

First of all, all those glowing reviews of Sorcerer to the Crown by Zen Cho are quite right. I’m just going to say that it was Saturday night, and I had some red wine, and this book was perfect. You might want to replicate the setting. It wasn’t the kind of book that sucked me in and made me spent 12 hours on the couch. On the contrary, I kept picking it up, reading a bit, then putting it down. Perhaps it wasn’t the book’s fault and I was just feeling distracted that weekend. That said, I enjoyed myself immensely while reading it. It’s quite fun and also funny. Favorite quote:

‘So you have found someone to teach you worse!’

Lest you think it was just an amusing romantic historical romp, here’s a brief list of topics it touches upon: Class. Race. International politics. Colonialism. Gender roles. Education of girls.

My other read was quite in contrast. It was Paul Lisicky’s The Narrow Door, out next January (can I even talk about it yet?). It was a magically beautiful memoir about love, grief, friendship, and how all those things change and are experienced at different points in life. The whole book feels like a quilt made of gossamer. It jumps in time, holding all these fragile pieces together. The sentences are almost translucent at times. For some reason I always find descriptions of male companionship and love incredibly heart-achy and touching. Perhaps it’s because I myself am a queer man. Perhaps this kind of love still feels forbidden from a larger society’s point of view, marriage decision notwithstanding. The Narrow Door has quite a few of those, and I was glad I had a glass of bourbon at hand. I’ll definitely mention it again closer to its release because it is already on my list of 2016 favorites, and we aren’t even in that year yet.

You Too Can Have a Body Like Mine by Alexandra Kleeman. Here’s what you should do. Read this book while listening to electronica. The combined effect of that music genre and Kleeman’s writing style make you feel as if time no longer exists. Or it makes reality feel like a continuous straight line with no beginning or end in sight, with no changes whatsoever. Maybe that’s why, sadly, I abandoned it. I couldn’t handle the depersonalization effect it seemed to have on me.

Saga # 5 by Fiona Staples and Brian K. Vaughan. For some reason, I refuse to read Saga in single issues. I like the trades. I wasn’t a fan of #4, but this one is pretty good.

Furiously Happy by Jenny Lawson. Yesterday was its release day, and I spent most of it with a giant raccoon cutout as we shot videos and took pictures for marketing purposes at work (if you don’t get to stage mock battles with human-sized cardboard raccoons at your place of employment, I feel sorry for you). I’ll be honest, Furiously Happy is better than Lawson’s first book, but it did give me an anxiety attack. I woke up at 2 am last night, convinced that some shit was going down. Apparently reading about other people’s mental issues reminds me I also have mental issues. But I’m not giving up, because the book is immensely funny and full of taxidermy, two things I look for in all books and find in so few.

I know you wanted a picture of me with a giant raccoon. You’re welcome.

Not too much time to write and read this week, as we are in full National Book Festival mode, but there’s always time for comics! I’ve mentioned a few in my previous post about depression/dysphoria reading (a friend of mine called this using books ‘as defense against dark arts’), but I don’t just read comics when I’m in the dumps. I read them… a lot. This year, it might have been most of the time (or it might mean I’m in the dumps most of the time, huh).

So here’s what I’ve been reading: 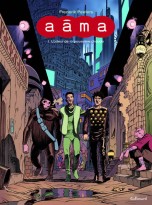 It is beautiful and terrifying at the same time. Well, perhaps ‘terrifying’ is not quite the right word. It looks as if it’s from another time and another place. To me, it feels like some remnant of 1970s-80s European pop culture that has been living in my subconscious and is now coming into view. It’s like watching some disturbing family movie you vaguely remember seeing as a child. It might be all the bizarre alien flora and fauna in it, or might be the colors and the way Peeters does faces.

If you’re around DC in September (read: if you’re coming to SPX), Peeters is going to talk about the series at Politics & Prose at Busboys & Poets Brookland on September 17th. I’m quite curious to meet the man whose mind produced these books.

The most beautiful magazine cover you’ve ever seen

Brandon Graham started it with Emma Ríos and a few other people (here’s an interview with them). It is so pretty. The second issue has a cover by Ríos, and it’s so beautiful I would have spent my money even if it were blank. Reading and subscribing to a comics magazine gives me a strange nostalgic feeling, like I’m in Japan and it’s Shonen Jump. Not that I ever read Shonen Jump on any regular basis. In fact, I don’t remember ever being subscribed to a comics mag. It’s nostalgia for something that never happened.

By a completely unplanned coincidence, Brandon Graham is also going to be at Fantom Comics on September 18th. They have a few other people coming, it’s going to be amazing.

Damn my weird phobia of talking animals. I avoided Blacksad forever, and it was my loss. I honestly didn’t expect a comic involving talking human/animal hybrids give me a commentary on race, offer a great noir reading experience, and feature some of the best art I’ve seen. It’s a must, required, all that jazz.

…I shared with him a healthy skepticism and a deep belief that we could somehow read our way out. – Ta-Nehisi Coates, Between the World and Me

Part of making this blog’s content broader means also opening it up to more personal matters. Matters like my trans-ness, my queerness, my depression, my struggle to make life more meaningful creativity-wise.

I am a trans man (if you need more info on trans people, you can start here). I am recreating my own body to fit what is in my mind. It’s a project. Sometimes I feel as if I’m sculpting a new David, chipping off marble bit by bit.

Gender dysphoria is a bitch. After being on T for 15 months now and being read (mostly) as male, it still comes out of nowhere and bites in the most unpredictable ways. The strangest things set it off. Arms, shoulders, shape of my hands, neck. Any body part is suspect.

It comes and goes, and right now it’s in the former part. I feel like I’m going nowhere, I’m angry at my facial hair, I’m angry at cis people. Even well-meaning ones. They have no idea. Books, being the general remedy for anything in my life, are what I turn to first for mental health needs.

Here’s where you expect me to give you a list of inspiring and uplifting trans memoirs. And perhaps reading these is a way to go, but mostly trans memoirs dig into my soul and make me cry. They helped me immensely in the early coming out period, and I still seek them out, but other people’s experiences with dysphoria are, oddly enough, not what I need right now.

What I need is good fantasy. This doesn’t happen often any more, since I somehow migrated to the hard sci-fi end of the pool in the past few years. Except this time I am going in the opposite direction, and so my current dealing-with-dysphoria pick is Karen Memory by Elizabeth Bear. Incidentally, there is a trans character in this one, accepted as such with no fuss – bonus. So far it’s greatly entertaining. I thought I was done with steampunk, but wait, apparently not. I think it’s because the book is not about goggles and divers steam-powered gadgets (there is a licensed Mad Scientists guild, though). It’s most definitely about people first. Badass women, more specifically (I know it will surprise the Sad Puppies contingent that women are people. If you have no idea who Sad Puppies are, read this pretty good summary of the Hugos kerfuffle.).

My other pieces of dysphoria/depression battle armor are comics. Here are some great ones that are out in trade: The Wicked + The Divine by Kieron Gillen and Jamie McKelvie; Rat Queens by Kurtis Wiebe; Chew by John Layman and Rob Guillory (it appears I only read Image publications? Seems wrong somehow.).

A few other series I am reading in floppy/single issue form are: 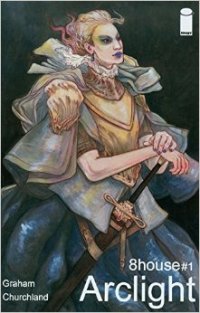 8house Arclight by Brandon Graham and Marian Churchland. I call it ‘the genderqueer Prophet‘. It has a distinct Graham feeling to it, and Churchland’s art is beautiful (read her Beast, it will blow you away). There is a goose. And if you’re in the DC area for SPX next month, Brandon Graham is going to be at Fantom Comics (my home away from bookstore) on Friday, September 18.

Descender by Jeff Lemire and Dustin Nguyen. This remains one of the most beautiful series art-wise, mostly due to Nguyen’s use of watercolors. It’s a space opera with robots. It’s out in trade on September 9, so you can get your hands on issues 1-6 of this pretty thing at once.

Kaptara by Chip Zdarsky and Kagan McLeod. Oh Chip, your mind is a wacky place. A fabulous wacky place.

And now, The Shocking And Unforeseen Conclusion: looking at this list, what we discover is that at this time in my life I really need comics and books that fly in the face of everything Sad Puppies stand for. Books with awesome women, books with genderqueer/queer characters, books with not just white people. Isn’t it amazing that those kinds of books can also be both therapeutic and entertaining?

And if you still need some trans memoirs, here’s a couple:

Man Alive by Thomas Page Mcbee. He is a great writer. It will dig into your soul. It will make you cry.

Redefining Realness by Janet Mock. She is amazing and so is her book.

And finally, a non-book item for you: Transgender Dysphoria Blues by Against Me! It’s a little known fact that I was a punk kid in my previous life.